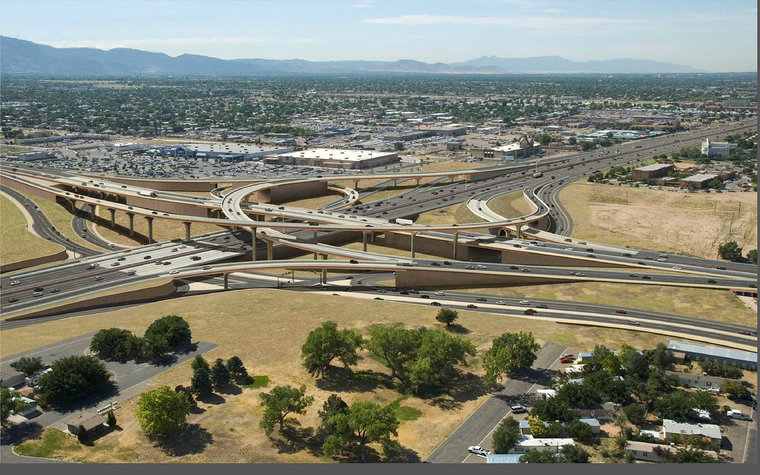 New Mexico, Texas and Montana departments of transportation were among eight winners in this year’s second regional contest in the America’s Transportation Awards competition.

The announcement was made last week at the 2015 Western Association of State Highway and Transportation Officials annual meeting. The projects won in each of the competition’s three categories: Best Use of Innovation, Under Budget, and Quality of Life/Community Development.

New Mexico won in the “Best Use of Innovation” category for medium-sized projects for New Mexico DOT‘s $93 million Paseo del Norte/I-25 reconstruction project. The project’s design-build process cut the construction time by nine months and created a seamless transition between the overpass and roadway.

“The New Mexico Department of Transportation is honored to have received this award,” said New Mexico DOT Public Information Officer Melissa Dosher. “We are extremely proud of our team who worked day and night, for more than a year to get this innovative project completed on time and on budget. This success story shows what teamwork can accomplish.”

Texas DOT won the in the “Under Budget” category for its $2.1 billion North Tarrant Express project rebuild and expansion of 13 miles of the Dallas-Fort Worth area’s most congested highways. This public-private partnership project cut construction costs and state officials estimate it will save taxpayers $12 million annually in maintenance costs.

“The key to the successful completion of this project was in the partnerships forged by the project team,” said Russell Zapalac, TxDOT’s Chief Planning and Project Officer. “Motorists traveling the Interstate 820 corridor can now enjoy their ride because individuals from the contractor, TxDOT, NCTCOG and the cities along the route putting our heads together and came up with a plan that would, ultimately, benefit all motorists traveling in the DFW-Metro area.”

Also winning in the “Best Use of Innovation,” category for small projects is the Montana Department of Transportation‘s $2.75 million Deep Creek Canyon Weekend Bridge Replacement project. This project created shaft foundations outside of the existing bridge footprint in advance of bridge removal and used precast bridge pieces to significantly accelerate the construction process.

“This award celebrates excellence in innovative management techniques and use of technology,” said Mike Tooley, MDT director. “MDT along with Morrison-Maierle, Inc. Dick Anderson Construction and Helena Sand & Gravel, worked hard to find the best approach to replacing three bridges under challenging circumstances. We are proud that our hard work behind the scenes allows Montana travelers to use our highways without giving it a second thought.”

Other departments of transportation winners included the states of California, Colorado, North Dakota and Utah, which won two awards.

The America’s Transportation Awards is co-sponsored by AASHTO, AAA and the U.S. Chamber of Commerce and annually recognizes the best transportation projects in four regional competitions.