U.S. Coast Guard veteran carries his leadership, discipline, and teamwork from military service to a career at BP 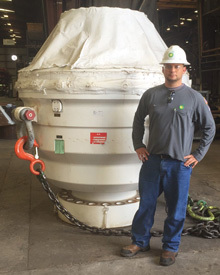 Former US Coast Guard officer Nicholas Porta sees many similarities between his old job helping defend the nation, and his new profession in the oil and gas industry, one he describes as a great fit for veterans.

Leadership, discipline, and teamwork are the qualities Porta learned in service, and ones that prepared him to work for BP. And these qualities are found among many veterans, Porta believes.

"People leaving the military have the same values and general traits - loyalty, dedication, a willingness to serve, and an ability to work safely and as a team," says ex-Lieutenant Porta, a 14-year veteran who has worked for BP for close to three years, currently as a member of the company's Subsea Blowout Preventer Reliability team.

"The similarities are strong when you see it from the perspective I have - as a team leader in the military, and as a member of a rig crew in the oilfield," Porta says.

"My time in the Coast Guard best prepared me to work at BP because it instilled the qualities that the company was looking for - leadership, discipline, and teamwork. I was extremely fortunate to land at BP, but in general, vets are a great fit for the oil and gas industry."

As a member of BP's Subsea Blowout Preventer Reliability Team, Porta helps oversee and make sure the critical blowout preventers on the ocean floor are operating properly. The blowout preventers are designed to limit any damage, and leaks, in the event of an accident.

"And in doing so, we are doing everything possible to ensure safe operations," Porta says.

After 14 years serving in the US Coast Guard, ten in active service, Porta, originally from West Virginia, was not sure of his future career path when he decided to move into the private sector. His experience has given him insight for other veterans.

"When transitioning to a civilian job in the oil and gas industry, vets should realize that it's not just a bunch of genius engineers that get jobs with oil and gas companies," he says.

"I know when I was hired from the Service Academy Career Conference, I intended to speak to a different company, and happened to strike up a conversation with the BP recruiter standing nearby.

"The recruiter told me that they weren't just looking for engineers, but for people with leadership and management experience as well. When I realized what I could do with BP, I excitedly applied and was lucky enough to be hired."

What he did not know at the time, but knows now, is how many skillsets from the military translate into the oil and gas industry. Porta has met many vets working in the industry, and quite a few working for BP.

"For instance, combat vets who drove heavy machinery in war zones? Driving a water truck to a well-site would be a cinch for you! Safety is the key word in our industry, and vets tend to have a record of following rules and operating in a safe manner."

"Although vets might not yet have the necessary technical knowledge or skills, they have the right traits to work in the industry. They are hard-working, determined, and understand how to operate as one team!

"And companies in the industry get that - which is why anyone transitioning from the military should look into where they fit within the industry."

Porta is proud to work in the industry. Like the military, it is challenging work, but veterans are trained to do it safely, and to use cutting edge technology.

"Plus... we are powering our nation and our future through the petroleum industry, and we are doing it cleaner than ever," says Porta.

In his different roles with BP, working in Wyoming, Alaska, and offshore in the Gulf of Mexico, Porta has seen first-hand how small groups of people have big jobs, ones that bring energy to the nation and "most importantly, to have each other's backs to make sure they return home in the same manner as they came to work."

Porta adds, "Vets should be proud to work in the oil and gas industry because our jobs provide a similar kind of satisfaction that serving in the military did.

"Our industry powers America and the U.S. Armed Forces; the oil and gas industry requires strategy, teamwork, discipline, and incorporates some of the most advanced technology in the world - albeit drilling and exploration rather than weapons systems."

After graduating high school, Porta knew he wanted to get a great education - and to continue playing football. He applied and was accepted to the U.S. Coast Guard Academy (USCGA).

"I also was lucky that I got to continue playing the game I loved - football - and meet the best friends of my life, who I consider my brothers and sisters."

After graduating from the academy, Porta spent 10 years on active duty, on two Coast Guard Cutters and a Tactical Law Enforcement Team. In these roles, he led counter narcotics missions from both strategic and tactical levels.

His appointment as the senior training liaison to the U.S. Navy at Afloat Training Group (ATG), Atlantic, in Norfolk, Virginia prepared him best for his transition to BP, Porta believes.

He led a 12-person team responsible for training and providing the operational certification for Atlantic Coast Cutters to deploy and conduct national defense, search and rescue, law enforcement, and all the other varied Coast Guard missions.

"This was an amazing and very rewarding assignment because I worked for incredible people, had an incredible staff, and continually learned leadership and communications lessons, all while giving shipboard Coasties the training and skills they needed to operate safely and effectively at sea," Porta says.

A traveling man, a football junkie, an avid soccer and basketball dad, and a West Virginia Mountaineer fan, Porta admits to being a professional hacker on the golf course. He was a volunteer assistant football coach at a local high school the last two seasons, an experience he describes as "awesome."

He is also currently using the GI Bill to pursue an MBA at West Virginia University, which has been a "very rewarding experience so far."

And Porta has advice for veterans.

"The best piece of advice that I could pass along to transitioning veterans looking to join the oil and gas industry is to seek out all the opportunities you can to learn," he says.

"This is a highly competitive environment, but your skillsets are valued! If you are interested in certain companies, try to expand your network and connect with employees in the industry."