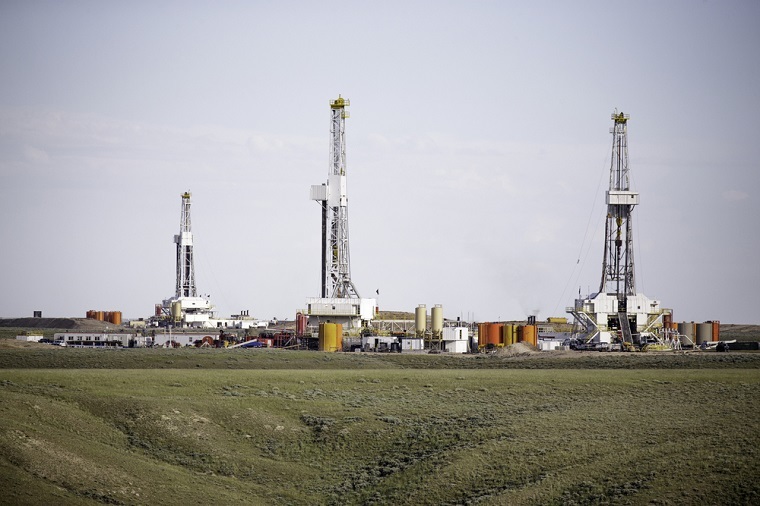 A fracking operation | Jens Lambert/Shutterstock
The oil and gas industry has invested billions of dollars in technology that has greatly reduced the country’s carbon emissions, a new report from the American Petroleum Institute (API) said recently.
The report said companies invested $90 billion in zero- and low-carbon-emitting technologies from 2000 to 2014. When overall investment in the shale gas industry is included -- an energy source that emits much less carbon than coal -- the study,  conducted for API by T2 and associates, finds the industry invested over $217 billion during this time frame.
Those numbers compare with $102.8 billion invested by all other U.S.-based industries over the same period and $111.3 billion invested by the federal government, the study said.
“Without doubt, we want clean air,” retired Army Capt. James McCormick, a bronze and silver star recipient and program director of Vets4Energy, an organization that aims to promote all sources of energy production, said.
“And we want to continue developing alternative and renewable sources of energy, but that development needs funding," McCormick said. "Part of energy security is that it can sustain such funding to keep that development going.”
McCormick said the oil and natural gas industry is the leading investor in methods to  reduce greenhouse gases.
“Carbon emissions in the country are at 25-year lows,” McCormick told TI News Daily. “All of this while America is producing more oil and natural gas than ever before, and our energy security is growing.
“That cycle of energy production, of doing more here in North America, makes sense no matter what side of the energy fence you are on," McCormick said. "More American production keeps more jobs and money here, and that funds the development of renewables.”
A measure of the impact of the natural gas boom, and how it has led to decreased emissions, was revealed in a recent briefing document published by the Energy Information Administration (EIA), the agency that tracks emissions.
The EIA said that in 2016, emissions from natural gas are expected to surpass those from coal for the first time since records were first kept.
“Even though natural gas is less carbon-intensive than coal, increases in natural gas consumption and decreases in coal consumption in the past decade have resulted in natural gas-related CO2 emissions surpassing those from coal,” the briefing said.
Natural gas consumption was 81% higher than coal consumption, and their emissions were nearly equal, the EIA said.
API President and CEO Jack Gerard has said that many of the investments are in technologies that reduce leaks, capture emissions and improve energy efficiency.
This has played a role in the 79 percent reduction in methane emissions from hydraulically fractured (fracking) wells since 2005.
“As a result of the industry’s investments, our nation’s CO2 emissions in 2014 were 55.5 million metric tons lower than the previous year – the equivalent of removing 11.8 million cars from the road,” Gerard said.
“No other industry’s investment comes close," Gerard said. "For context, the oil and natural gas industry investment is higher than the automotive industry, electric utilities, and agriculture and food-processing industries combined. More broadly, the study demonstrates how market-driven, private-sector leadership can achieve public policy goals more quickly and more efficiently than government programs and mandates. This latest data from the study makes clear that we can grow our economy, create good-paying jobs, lead the world in energy production and achieve significant environmental improvements.”