Arizona Department of Transportation issued the following announcement on Nov. 7.

When blowing dust reduces visibility along 10 miles of Interstate 10 between Eloy and Picacho Peak, a detection and warning system developed by the Arizona Department of Transportation will quickly tell drivers to reduce speed for safety.

Blowing dust area signADOT is completing installation of sensors, overhead message boards, variable speed limit signs, speed-feedback signs and closed-circuit cameras to create this first-of-its-kind detection and warning system in an area that is prone to sudden dust storms. The prototype system is expected to begin operating in the coming weeks between mileposts 209 and 219.

Those entering this stretch of I-10 already see signs saying Caution: Variable Speed Limit Corridor. This alerts drivers to a key part of the system: programmable signs that can instantly reduce the legal speed limit.

Placed every 1,000 feet for the first mile in each direction and then every 2 miles, the variable speed limit signs can change from 75 mph to as slow as 35 mph when there is blowing dust.

Electronic message boards placed 5 miles apart in the pilot area will alert drivers to blowing dust, while ADOT traffic operators can use overhead message boards on the way toward the dust detection zone to warn drivers of potentially hazardous conditions ahead.

Closed-circuit cameras will allow staff at ADOT’s Traffic Operations Center in Phoenix to see the real-time conditions on the roadway, while in-pavement sensors will report the speed and flow of traffic.

Along with the threat from monsoon storms in the summer and fall, conditions in this stretch of I-10 are such that strong wind any time of the year can suddenly produce localized dust that severely reduces visibility, a phenomenon known as a dust channel.

The warning system also includes weather radar, which will be mounted on a 20-foot tower at the State Route 87 interchange in Eloy, that can detect storms more than 40 miles away. This radar will complement 13 sensors mounted on posts next to the freeway that use beams of light to determine the density of dust particles in the air.

In addition to enhancing safety by providing earlier warnings about blowing dust, this innovative system will advance ADOT’s understanding of whether similar technology can be effective in other locations around Arizona.

The system, costing about $6.5 million, is funded in part by a $54 million federal FASTLANE grant ADOT received for I-10 projects that widened stretches between Eloy and Picacho and between Earley Road and Interstate 8 in Casa Grande to three lanes in each direction. As part of those projects, costing $115 million in all, ADOT improved interchanges at State Route 87 near Eloy and Jimmie Kerr Boulevard in Casa Grande.

Technology can’t replace common sense when it comes to driving into a dust storm. Though drivers will have almost instantaneous warnings about hazardous conditions along these 10 miles, the safest course of action will remain putting off travel if a severe storm is imminent. If caught in a sudden dust storm in or beyond the pilot area, a motorist should pull far off the roadway, turn off lights and remove one’s foot from the brake.

For additional information on dust storms and safety, including what to do if caught in blowing dust, please visit PullAsideStayAlive.org. 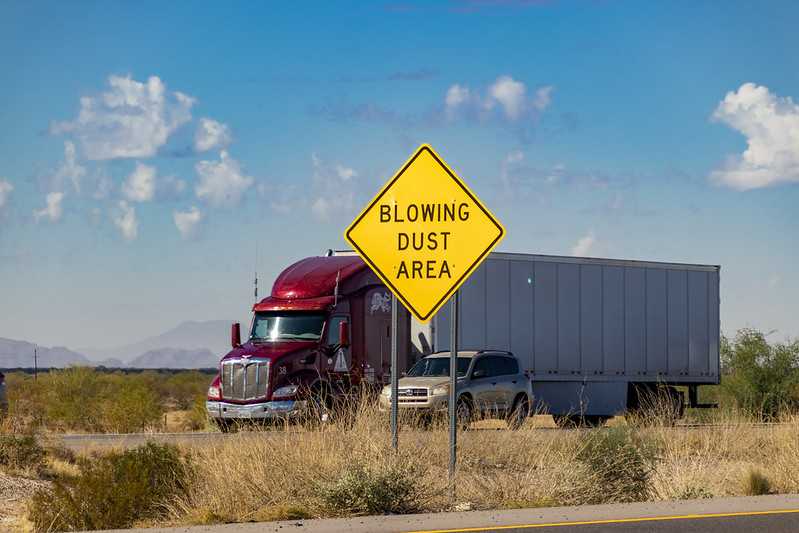